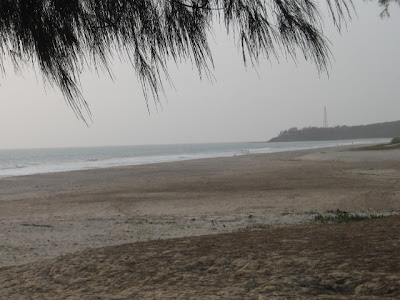 For our 13 th wedding anniversary, we had made a week end trip to a lovely beach called Kashid, which is about 170 kilometres from pune, on the Konkan coast. The trip was lovely, memorable, soothing. The best part was that we were totally cut off from the outside world. Mobiles (and black too. I HATE those things—heh heh!) did not work there. 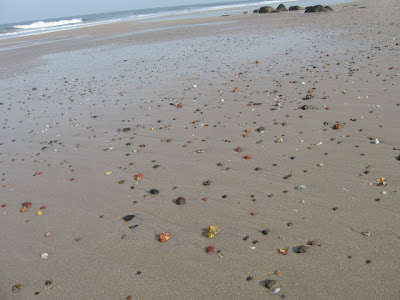 We had almost the whole beach to ourselves. When we went to the beach, early in the morning, the tide had washed ashore hundreds of colourful pebbles. They were so beautiful, embedded in the sand. (see pictures.Click to enlarge) It made me think that they are like people who come into your life, at different points in time. I have moved all my life and I feel blessed that I have the ability to make friends easily. Whatever place I have lived in, I still have good friends there, whom I can just call and say I am visiting them and they would welcome me with open arms. (Another good thing about moving is that you can lose touch with the ones you do not want in your life!) 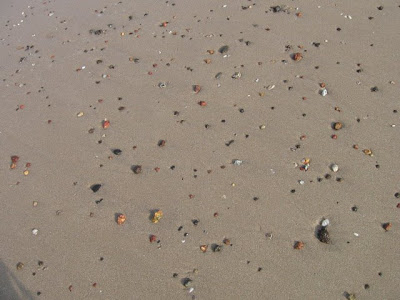 Lying on the beach, watching my family at the distance, and listening to the ocean sounds was really tranquilizing and I could not help philosophising. At different points in our lives, different people are important. We change every day. The people around us change every day. I am sure that you are no longer the person that you were five years ago. Satish always says that in life, there are no permanent friends and no permanent enemies. I used to argue with him about the permanent friends part. I used to tell him that some friends ARE permanent. Yet, time has proven that even good friends do drift apart for various reasons. Sometimes, it could just be that your friend was really busy getting on with their life and after a while you began getting on with yours. Sometimes, it could be that you changed and you outgrew the friendship. Sometimes you drift apart as your spouses cannot stand each other’s spouses after marriage! (All married couples here would agree!)

As one grows older, one becomes really picky and choosy about whom to let into your life. Most of us who have crossed 35, would agree that unlike in your twenties, what people think, does not matter at all. You become aware that time is indeed running out and you are getting older. (Perhaps a thought which never occurred in the twenties) You want to make the most of NOW. You are so much more confident (Perhaps, having seen life and faced birth and may be death too. Both change you.) and so much surer of what you want, where you want to go and whom you want to spend time with. 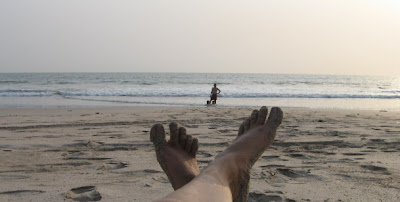 As I lay there thinking, I was so thankful for the good friends, currently in my life. Secretly, I still feel that some things never change. Some things are indeed permanent—and some friendships do last forever.

At least in your heart.